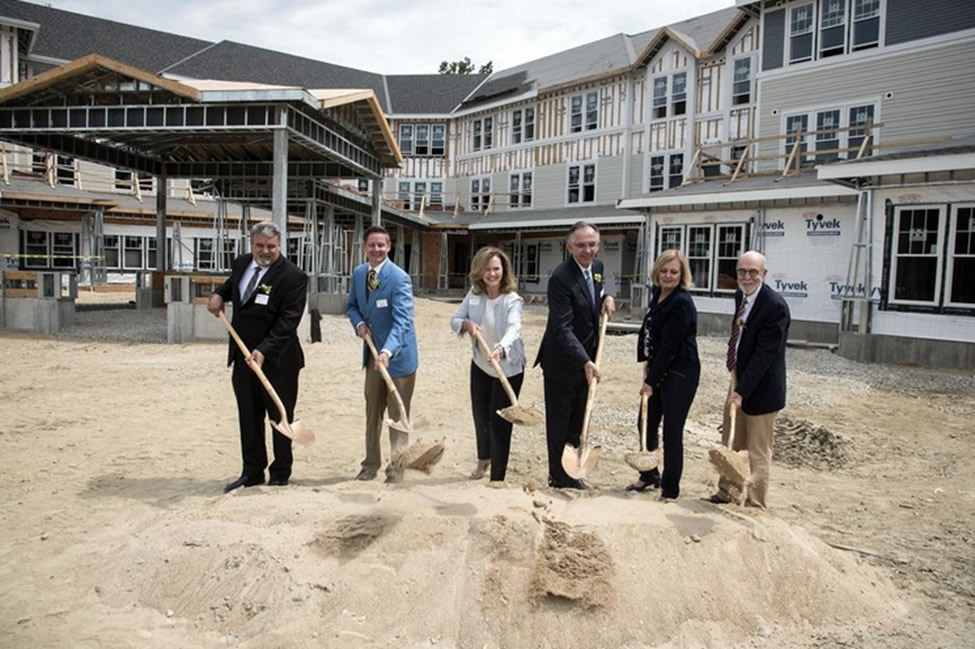 The first phase of a large development project on Silver Street is nearing completion, as the upcoming assisted living community Tuesday held a groundbreaking and dedication ceremony.

LCB Senior Living, based in Norwood, Mass., hopes to open its 75-apartment center later this year.

“We are thrilled to be here in Dover,” said LCB President Steve Puliafico. “We have a rich history in New England in providing senior housing. It’s not a role we take lightly. (It’s) not just a business to us.”

LCB, which touts itself as an independent, assisted and memory-care residence for seniors, is located at 100 Sterling Way. The shell of the building has already been constructed, and crews continued to work even as the ceremony took place.

The building is located at the site of the former McIntosh College. Puliafico said LCB will employ a staff of more than 70 at the Dover location.

“This is an extraordinary contribution to our community,” said state Sen. David Watters, D-Dover. ”(Silver Square) is a fabulous development that is just right for this area.”

Elected officials, city employees and business leaders joined LCB and its partners at the dedication ceremony. Dover officials said the city is very excited to welcome the assisted living community to the area.

“We’re certainly very receptive to folks wanting to do business here in Dover, and we’ve done everything we could to put our best foot forward,” City Manager Mike Joyal said.

Upon opening, the LCB project will mark the completion of Phase I of the Silver Square project. Phase I also included a Dunkin’ Donuts and The Garrison Hotel, both of which opened earlier this year.

In conjunction with Phase I, the developer, VMD Companies, agreed to work with the city to construct the new traffic roundabout at the intersection of Silver Street, Route 155, Silver Street Extension and the Spaulding Turnpike.

Joyal said the partnership with VMD allowed for the construction of the roundabout and the upgrade of the Silver Street streetscape five years ahead of schedule, with no additional impact to Dover taxpayers.

Phase II of the project will include a 66,000-square-foot medical office and a bank.
All told, Phase I and II represent a development project of more than $50 million.

Puliafico said the communities boast “vibrant, engaging activities programs,” along with award-winning food and other amenities.

“As I reach a certain age, I look with a little more interest at these kinds of residences,” Watters said with a laugh. “This is a great asset for New Hampshire’s greatest resource — an aging population.”